October 21, 2011 would have been the 100th birthday for Mary Blair. Google celebrated this Disney Legend’s birthday with a Google Doodle! 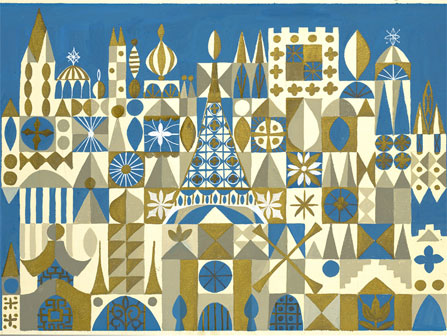 Mary used simple shapes and patterns along with creative color in her work that was used in a variety of scales. She is of course responsible for the style and concept of Its a Small World.

She also has a huge mural on display at the Contemporary Resort – a 90-foot, floor-to-ceiling ceramic mural celebrating the Grand Canyon and the Southwest.

In addition to her work in the park Mary is also responsible for the concept art and design for Disney films, for example this concept art was created for Peter Pan and features Peter’s mermaid friends sunning themselves.

Included in Mary’s work are some Polynesian designs used for the concept of Its a Small World. These were some of my favorites but there are countless works by Mary worth exploring.   They don’t make them Disney Legends for nuthin’!